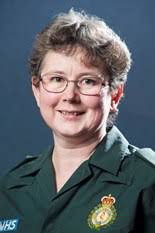 Fenella trained as a doctor at St George’s Hospital Medical School in London and has trained and worked exclusively in London, initially in paediatrics before specialising in Emergency Medicine including six months on London’s Air Ambulance. For the past 9 years Fenella has held senior management roles within the NHS, working for both the London Ambulance Service NHS Trust (LAS) and Barts Health NHS Trust where she is an Emergency Medicine Consultant on the Royal London site. Having joined LAS in 2008 Fenella was appointed Executive Medical Director in March 2016.