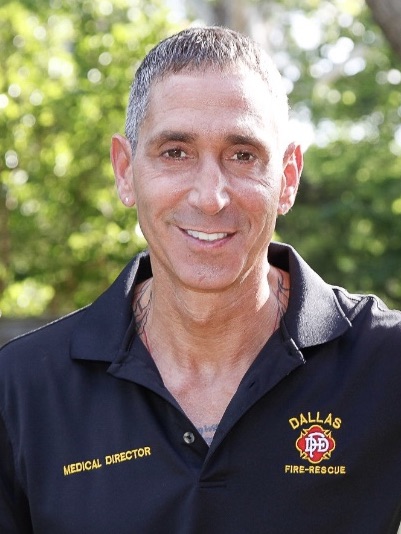 As a kid growing up up just outside of New York City, Marshal Isaacs spent a great deal of time chasing ambulances and fire trucks on his bike after school. Today, Dr. Marshal Isaacs is fortunate to be paid to “chase ambulances and fire trucks”, serving as the Medical Director for the UTSW/Parkland BioTel EMS System and the Dallas Fire-Rescue Department, one of the busiest medical 911 response systems in the United States. Dr. Isaacs, a native of New York City, began his education at Union College in New York, during which time he completed studies of comparative health care systems at the University College of London and the University College at Uppsala, Sweden. He later served as a congressional intern for then U.S. Representative, Albert Gore, Jr. Following graduation from The State University of New York at Stony Brook Medical School in 1988, Dr. Isaacs completed formal residency training in Emergency Medicine (EM) at Allegheny General Hospital in Pittsburgh, Pennsylvania, where he later served as one of the program’s Chief Residents during the 1990-1991 academic year. From 1991 to 1992, Dr. Isaacs completed fellowship training in Prehospital Emergency Medical Services (EMS) at Stanford University under the direction of a previous administrator of the National Highway Transportation Administration (NHTSA), Dr. Ricardo Martinez. In addition to his fellowship training, Dr. Isaacs served as the Lead Flight Physician for the Stanford Life Flight air medical transport program, thus gaining significant experience in both ground and air-based EMS. Following his formal training, Dr. Isaacs then joined the faculty of the University of California, San Francisco (UCSF) School of Medicine and was based as a faculty member and attending emergency physician at the county’s level I trauma center, San Francisco General Hospital (SFGH). Dr. Isaacs first served as the Medical Director of the Paramedic Base Station for the City and County of San Francisco. Soon afterwards, Dr. Isaacs was asked to assume the role of Medical Director for the City’s Paramedic Division (a health department service at that time) and he was also appointed Medical Director for the San Francisco Fire Department (SFFD), medically-directing its citywide Early Defibrillation and Basic EMT/First Responder programs. In July 1997, the San Francisco Department of Public Health Paramedic Division and the SFFD were merged into a single agency and Dr. Isaacs had the honor and privilege of serving as the Medical Director for San Francisco’s reorganized EMS field response. During his 13-year tenure with the City of San Francisco, he implemented advancements in patient care, prehospital care research, and oversaw the proliferation of automated defibrillators throughout the community. In 2006, Dr. Isaacs was recruited to Dallas, specifically to work directly with Dallas Fire-Rescue and to personally provide round-the-clock medical oversight for the City of Dallas’ EMS program, one of the busiest in the nation. In 2012 Dr. Isaacs was appointed Medical Director for Prehospital Emergency Medical Services/BioTel for the Parkland Health & Hospital System and in 2015 he was appointed Medical Director for the 11-city consortium of fire department-based EMS programs known as the UTSW/Parkland BioTel EMS System. Dr. Isaacs also serves as a senior Attending Physician and Faculty Member in the Department of Emergency Medicine (EM) at the Parkland Memorial Hospital Emergency-Trauma Center and is a full Professor in the Department of Emergency Medicine at the University of Texas Southwestern Medical School. Dr. Isaacs has a special interest in addiction recovery and serves as the Chairman of the Committee on Practitioner Peer Review and Assistance as C0-Chair of the Dallas County Medical Society’s Physician Wellness Committee. Dr. Isaacs is a tireless advocate for physicians, nurses, firefighters, paramedics and police officers suffering from impairment due to substance use disorders.